“Elvish, Klingon & Dothraki: The Art & Science of Language Creation,’ was an undergraduate class that harnessed “nerd culture” and popular and hobbyist interest in  “conlangs,’ or constructed languages, to  present basic concepts in linguistics and linguistic typology. The products of the course was Fosk, a new, collaboratively constructed language as well as  a creative  approach in linguistics pedagogy and collaborative conlanging. Students drew from the applied study of real world languages  to create their own “conlang” and have published their completed language and associated “conworld” on this site as a resource for the linguistics and hobbyist community. 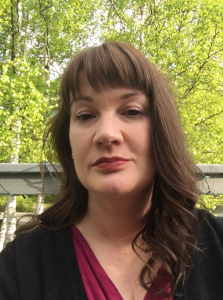 Dr. Shoaps is Assistant Professor of Anthropology and Linguistics. She strives to bring a hands-on perspective to her teaching so that students learn skills that allow them to analyze linguistic and cultural practices that surround them. Her teaching at UAF has been informed by her sense of civic and moral duty to leverage her scholarly training to help students become better people and citizens by cultivating critical thinking and analytic skills that will shed new insights on the world outside the classroom. Dr. Shoaps attempts to provide students with opportunities to have hands-on practice analyzing “everyday’ and “real world’ language materials by consistently trying to develop innovative projects and assignments that prompt students to combine their creativity with their understanding of course concepts.

She received her training in Anthropology at the University of Chicago and her Ph.D. in Linguistics at UC Santa Barbara, where she specialized in linguistic anthropology and the description of K’ichee’ branch Mayan languages.  Her research has also examined Pentecostal and Maya Catholic religious language and American consertive talk radio. Since moving to Alaska  she has studied military words for drones and is beginning research on Gwich’in and Ahtna as well as a collaborative project on human-animal interaction in Alaska dog mushing. She has published in Text, Pragmatics, American Ethnologist, the Journal of Linguistic Anthropology, Anthropological Linguistics and in edited books.

Before she knew what linguistics or anthropology were  she played far too much Dungeons and Dragons, read a lot of sci-fi and fantasy novels and was fascinated by Tolkien’s conlangs.

The following students contributed to the development of the Fosk language: